Speech of the Rector of University of Baghdad 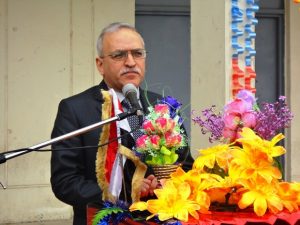 In the name of God, the Merciful and the compassionate

University of Baghdad is characterized with being one of the oldest and the largest universities in the Middle East. The history of its foundation extends with the establishment of its colleges such as the college of Islamic Sciences, which is founded in 1067 AD, to develop the university later and go ahead as the first official university in Iraq in 1957. The global architect Walter Krubios, formed his modern design as the finest masterpiece in the history of the global universities and on an area measured nearly four million square meters and that makes our university the biggest one in the history of the global universities, as it includes most of the medical, scientific, and human specializations and the sciences edges in (24) college, (4) institutes for higher studies, (16) advisory offices, (9) scientific centers and (15) research units to graduate thousands of students every year so that  to contribute in human and nation-building and for its sublimity.
The flow of the Tigris river, encircles each side of our university, so it seems like a peninsula, where students, researchers, and professors are blessed with a scientific and a typical climate in the middle of the university’s gardens, flowers, and trees which spread in every spot and every  place in  the university; And are blessed with a scientific environment with the best typical classrooms and the modern scientific laboratories and the most beautiful and the biggest Olympic sports stadiums and other scientific requirements which are needed for the teacher and the student. So that the university will enhance and develop according to a considered strategies to achieve a huge scientific enhancement.

Baghdad university is superior to more than 18 thousand university within the global qualifying such as the global Webometrics classification, achieving a historical victory to the reality of the Arab education by   Superiority on a huge number of European, American, Canadian, and Arab universities to be the most important and prominent university among the global universities ,and it seeks to achieve an advanced ranks to reach the  Climax with its companion from other universities especially since the number of the students is increasing every year where the number of the students in the primary studies is about 60 thousand male and female students while in the higher studies the number of the students is about 8,465 thousand male and female students. In addition to that, the university includes many of the researchers, scholarships and research fellowships in the finest American, European and Canadian universities to qualify as much as possible as of the scientific competences from teachers, trainers and creators in the management of this giant university which spends for its students and its scientific researches and allocates the needed sums so as to  graduate the best competences and at the same time it  brings  a great  benefits to the homeland and the society by  preparing a very well-qualified awarded graduates such as doctors, engineers, thinkers, creators and administrators.

Despite the challenges which Iraq faced because of the difficult conditions the country had gone through, the university was and it has still the biggest challenge itself  for the most extreme conditions, where it stood proud in spite of all  the circumstances, and it presented more than half a million graduates and did not stop one day to go on according to a confident paces  in building man and community  through its slogan which it lifted, saying ” the university in the service of society” , and through it the university seeks to provide its services and expertise directly to the community and that is through the workshops, training courses and its programs of developments which provided to all the government  and non-governmental institutions, seeking to provide more in order to make the Iraqi society conducts all the global developments to contribute in the reconstruction of Iraq and create a creative man, therefore the university ensures that it will remain keen to keep up with the latest  global academic  developments, to communicate with the edges of globally advanced sciences and technology to remain always a shining beacon radiating science and virtue and supplying life to man who is capable of building the homeland, and capable of serving, developing and achieving the aspirations of his people.